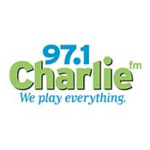 KYCH-FM (97.1 MHz) is a commercial radio station in Portland, Oregon. It is the property of Entercom and broadcasts an adult hit in radio format labeled "97.1 Charlie FM". KYCH-FM plays a fairly wide mix of music, mainly from the rock and pop genre, from the 1960s to today. A large part of the playlist consists of modern rock and classic rock from the era of MTV music video, 80s and 90s. The station does not have jockeys on disks, instead of every three or four songs play funny or ironic messages. Charlie FM 97.1 is a broadcast radio station in USA, broadcast in format Oldies / Pop / 80s