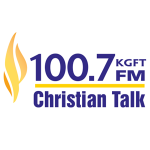 KGFT is a Christian radio station in Colorado Springs, Colorado, broadcasting on 100.7 FM. The station is owned by Salem Media Group. The station signed in 1977 as KZLO, also known as "Z100", and served the Pueblo market. The station evolved into a CHR format and changed its call letters to KATM and eventually its alias on air to "The Kat". It entered the Colorado Springs market in 1988 and, due to competition from CHR KIKX as well as KKMG, which also moved to the Colorado Springs market, KATM adjusted its playlist and became the "Rock 40" station. market place. KGFT - Christian Talk 100.7 FM is a broadcast radio station in USA, broadcast in format Christian Music