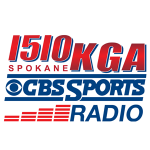 KGA (1510 AM, "103.5 The Game" is a radio station serving Spokane, Washington. Owned by the Stephens Media Group, it broadcasts a contemporary urban format. KGA studios and offices are located on East 57th Avenue and its broadcasting location is in Spangle, Washington, which aired in 1927, was one of Washington's first radio stations and was also broadcast by a translator in Spokane on 103.5 FM. The station broadcasts broadcasts from the Spokane Indian minor league baseball team, the Spokane Chiefs junior ice hockey team, and Gonzaga University teams. KGA - CBS Sports 1510 AM is a broadcast radio station in USA, broadcast in format Talk / Sport