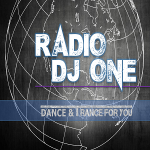 The project Radio DJ ONE it was created and born on 15.01.2009. It was on air with many months interruptions because no have money for open and play radio nonstop. On the 07.05.2012 reborn with a new sponsor for a little time. After a long periode what was again down, radio reborn and reopen it on 10.2014 with a new sponsor, TOOX, a German independent music producer, remixer and DJ, till 10.2015 when colaboration stop it. Radio DJ ONE, Rumunsko, vysílaná ve formátu Elektronická