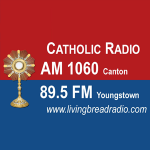 WILB, the Living Bread Radio Network, is an AM radio station in Canton, Ohio, United States, which offers Catholic programming to the areas of Canton, Akron and Cleveland. The station only broadcasts the day with 15,000 watts on 1060 kHz, making it the largest Catholic radio signal in the state of Ohio. Much of the station's programming is provided by EWTN Radio. The station also produces many local programs and reports. Because WILB shares the same frequency as the KYW clear channel station in Philadelphia, Pennsylvania, it only broadcasts during the day. However, listeners around Canton can turn to the station translator, 94.5 FM, to listen to the programming. The station also has streaming audio online and on its mobile application. WILB - Living Bread Radio 1060 AM, Spojené státy americké, vysílaná ve formátu Křesťanská hudba