SHE RADIO - ROCK AND ROLL CHANNEL 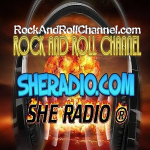 This is WSHE 103.5-FM, the name and location of the dial long associated with the legendary South Florida station that has become a paradise for rock lovers for 25 years playing Aerosmith, Van Halen and Bob Seger. But this new WSHE has a different rhythm. At the end of May, Clear Channel Media and Entertainment Miami launched the formats, from the Spanish music station WMIB to contemporary for adults. WSHE plays hits from the 70s to the 2000s, or as sales director Lonny Anger says, "SHE plays everything", which is also the station's new slogan. SHE RADIO - ROCK AND ROLL CHANNEL ist ein radiosender in USA, ausgestrahlt im format Oldies / Rock ’n’ Roll