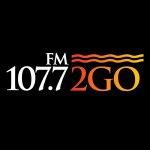 2GO is a commercial radio station based in Gosford, New South Wales, Australia. The broadcast area is the NSW Central Coast, a region that extends from southern Lake Macquarie to the Hawkesbury River. 2GO was the Central Coast’s first radio station starting on the AM band with 1310, moving to 1323, and the final location on the AM band was 801 (to allow for stereo broadcasting). 2GO has since moved to its current frequency of FM 107.7. Ownership of the station has changed a number of times. For some period it was a part of the WESGO group, being a two-station company comprising 2GO in Gosford and 2WS in Sydney. 2GO supports the Give Me Five For Kids and Little Legends. 2GGO - 2GO 107.7 FM είναι ένας ραδιοφωνικός σταθμός μετάδοσης στην Αυστραλία, ο οποίος μεταδίδεται σε μορφή Ποπ