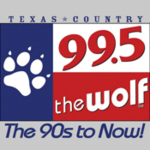 KPLX (99.5 FM, "99.5 The Wolf") is a US commercial radio station that broadcasts 99.5 FM country music, serving the Dallas / Fort Worth Metro in Texas and owned by Cumulus Media. The resort's studios are located in the Victory Park area of ​​Dallas, just north of the city center, and its transmitter is located in Cedar Hill, Texas. 99.5 was activated in 1962 as KXOL-FM. It was functioning as a sister station of KXOL 1360 (now KMNY). The calls changed for KCWM in the late 1960s and for KPLX in 1974. He belonged to the Wendall Mayes family (KNOW Austin, interests in KCRS Midland), until 1974, when he was sold to Susquehanna Broadcasting (later acquired by Cumulus Group). The Wolf 99.5 FM, Yhdysvallat, lähetetty muodossa Country