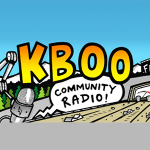 KBOO is a listener-funded nonprofit FM community radio station from Portland, Oregon. The mission is to serve groups in their listening area that are underrepresented in other local radio stations and to provide access to the radio waves to people with unconventional or controversial preferences and views. It transmits 24 hours a day, seven days a week and has been on the air since 1968. KBOO is financially supported by donations from members and a small foundation. As of February 2006, the station had about 6,800 members. The station drives twice a year for Pfandfahrten. The annual KBOO budget in 2006 was around $ 900,000. KBOO - Portland Radio Station 90.7 FM est une station de radio diffusée en USA, au format Pop