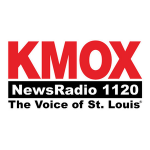 KMOX (1120 kHz) is a commercial AM radio station in St. Louis, Missouri. Belonging to Entercom, it is a 50,000 watt Class A single channel station with non-directional signal. KMOX studios and offices are located on Olive Street at Tucker Boulevard in the Park Pacific building in St. Louis. KMOX is referred to as "NewsRadio 1120 - The Voice of St. Louis. " It is considered the first station in the USA that programs all talk shows around the clock. The KMOX transmitter is located on Route 162 in Pontoon Beach, Illinois. With good radio, the KMOX night signal can be heard in most central United States as well as in Mexico and Canada. His signal throughout the day provides at least secondary coverage for most of eastern Missouri and much of southern Illinois. KMOX - NewsRadio 1120 AM een radiostation in VS, uitgezonden in het formaat Praatradio