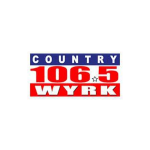 WYRK is a country radio station located in Buffalo, New York. Broadcasts from the top of the Rand Building in Buffalo, where its studios are located on the 12th floor. Frequency 106.5 was first recorded as WBEN-FM in 1946. This station changed the display to 102.5 in 1959 and is now WTSS. After the change, 106.5 became WADV, an easy listening / MOR station. WADV was the first station in western New York to transmit an FM stereo signal . The WADV was sold in April 1981 to Stoner Communications, which immediately changed the station to a country music format and adopted the callsign used today. The initial format was semi-automated, with staff added a few years later; as such, it was not immediately successful, as the WXRL, owned by Ramblin 'Lou Schriver, had been the landmark of the city's heritage for over a decade when WYRK adopted the format. WYRK received a big boost in popularity with the country's massive change of style in the early 1990s and adopted the new sound of the country. WYRK - Country 106.5 FM en sändningsradiostation i USA, som sänds i format Countrymusik