WGN - Radio 720 AM Chicago's News and Talk and Sports 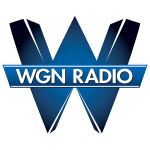 WGN, 720 kHz, is a commercial AM radio station in Chicago, Illinois, United States. The station is owned by Nexstar Media Group. The station's studios are located on the 18th floor of 303 East Wacker Drive in the Chicago Loop, while its transmitter is located in Elk Grove Village . Since about 1990, WGN has maintained a news / talk format. WGN does not broadcast in HD. WGN is the only radio station owned by Nexstar Media Group, which primarily owns television stations; it had been one of Tribune Media's flagship properties, through its subsidiary Tribune Broadcasting, prior to its merger with Nexstar in 2019, and was co-owned by the Chicago Tribune, whose slogan "World's Greatest Newspaper" served as the base at the WGN call sign, from 1924 to 2014. WGN - Radio 720 AM Chicago's News and Talk and Sports, Yhdysvallat, lähetetty muodossa Talk Radio / Urheilu