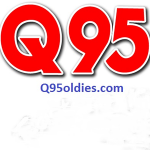 WFBQ (94.7 FM, "Q95") is a radio station in Indianapolis, Indiana, USA, owned by iHeartMedia. The studios are located at 6161 Fall Creek Road in northeastern Indianapolis. The transmitter and the antenna are located in the northeast of Indianapolis. It is the flagship of the popular national syndicated program The Bob and Tom Show. WFBQ was changed to an album rock format at 7am on February 14, 1978. After several years of classical rock music, WFBQ switched to classic rock in 2005, when rival WKLU switched to classic hits. It also has two sister stations, WNDE (originally WFBM) and WOLT (originally WXTZ-FM, later WRZX). WFBQ has been home to the Bob & Tom Show since 1983 and is the flagship of 2014 after iHeartMedia's distribution to Cumulus Media changed. It was the flagship station for the Indianapolis Colts game broadcasts from 1998 to 2007 Super Bowl. The rights have since been acquired by Emmis Communications' WLHK. WFBQ is the state primary source for the Indiana Emergency Alert System. Q95は 米国の放送ラジオ局です、オールディーズ / ロック / 70年代形式で放送