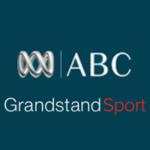 ABC Radio Grandstand is a live radio sports focused commentary and talk-back program which runs on the Australian Broadcasting Corporation local radio network across Australia and on one digital-only station. The program runs on Saturdays and Sundays, typically from noon or an hour before, until 6 pm. Sports that are covered by ABC Radio under the Grandstand banner include Test and One Day International cricket, Rugby league (mostly in Queensland and New South Wales), the Summer Olympics, Australian Football League games, Australian Open tennis and soccer matches, including games involving the Socceroos and the A-League competition. However, when there are major football, cricket or tennis matches in progress, or the Olympics and Commonwealth Games, the coverage is often continued for the entirety of the relevant time frame if Grandstand is broadcasting the competition, as opposed to simply reporting the results. This can result in broadcasts in the early hours of the morning if Australia is playing in a cricket Test on another side of the world. ABC Grandstand Sport z Australia, nadawany w formacie Wiadomości / Sport