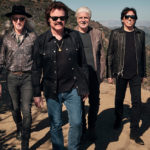 They have been going for five decades since they first got together in San Jose, California. When Tom Johnston was the lead vocalist they were more mainstream rock, then when Michael McDonald joined in ’77 they became more soul influenced. All The Doobie Brothers All The Time. Exclusively The Doobie Brothers, Birleşik Arap Emirlikleri formatında yayınlanan, yayınlanan bir radyo istasyonudur Pop Müzik