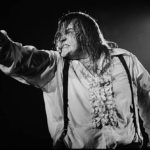 Famous for his theatrical live shows and his powerful voice, his Bat Out Of Hell trilogy of albums have sold 50 million copies worldwide and are still selling 40 years after the release of the first of them. All Meat Loaf All The Time. Exclusively Meat Loaf, Birleşik Arap Emirlikleri formatında yayınlanan, yayınlanan bir radyo istasyonudur Rock